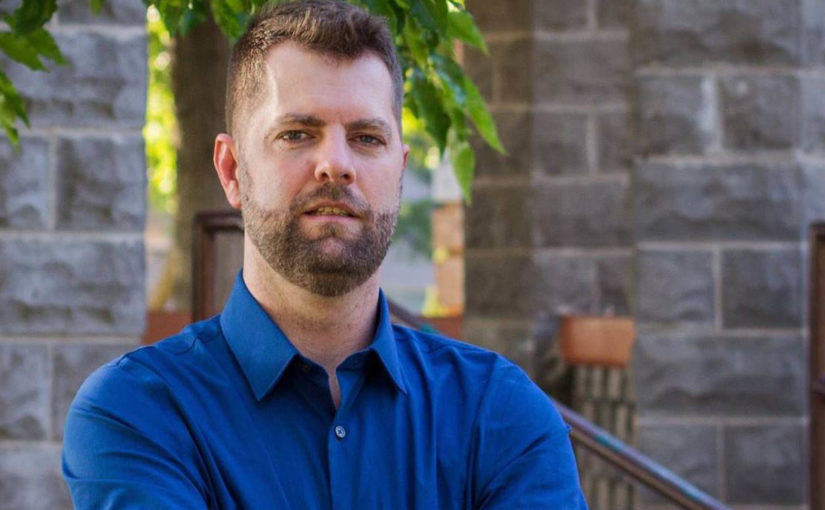 So his children finally pushed him.

“They told me to go out, see the world, and show it to them. They wanted to see it too, you see. And for how many years do your children ask to live life through you, right?” So he did it. He quit his job, packed his bags, started a vlog for his two favorite people and biggest fans, and went out into the world.

The name of his vlog? The Deaf Wanderer

And no, that’s not some clever metaphorical deafness like when we say we’re blind to color or race. Or, maybe it is, but that isn’t the main point. Chris Haulmark is actually deaf; has been since the age of one.

I didn’t mention that before because – as Chris Haulmark explained – the moment you do, people start seeing you through that prism. They can’t help themselves. You become ‘that deaf guy’. The disability subsumes your identity. That defeats the entire point of what he is trying to do. He wants who he is and what he is doing to go first.

He also wants to show the world what he can do. “A lot of people thought I couldn’t solo travel as a deaf person. I showed them that I could.”

More importantly, he also showed them how normal travel could be. Most of his vlogs aren’t about him being deaf. They’re about the day-to-day experiences of travel. Often, the only difference between his vlogs and those of other travelers is that his are in sign language. That could be why his vlog built up from his two original fans to a followership of over 20,000. It showed other deaf people what he – and they – were capable of.

Sure, there were some unique problems. For example, how did you wake up in the morning when you can’t hear your alarm clock? “There are alarms that shake your bed to wake you up,” He told me. But of course, when you’re traveling you only have much space in your bags. So he didn’t take one of those. So what did he do instead? “I would drink two full glasses of water before going to bed.” Yes, he admits with a big grin, it did lead to some very close calls.

“Another big problem is that you can’t hear people calling out when there is an emergency, or when you’re doing something wrong. Sometimes people think you’re ignoring them and they get angry. But when you tell them you’re deaf, they understand it pretty fast.”

Not that they always notice when you don’t understand. Then things can get pretty hairy.

“Once, while traveling in Guatemala, the bus stopped in the middle of nowhere. Some people said some stuff, but I couldn’t understand. So I assumed the bus had broken down. I didn’t know, though. Other people started getting off, so I grabbed my backpack and did the same. I was hoping to find to find a taxi or flag down another bus to the next town.”

“What I found instead when I rounded the corner was a pickup truck surrounded by men with rifles. You don’t want to know how quickly I got back on that bus! To this day, I wonder what would have happened if I would have pressed onwards. It’s a good thing I didn’t. After all, Guatemala is a pretty dangerous place.”

Problems like that didn’t stop him from seeing the world, however. In the end he traveled for almost two years. He saw Latin America, Europe, and Asia. He vlogged the entire experience and never forgot the reason he was out there (many vlogs are directed at his children).

Though he visited a lot of places and a lot of cultures, he found that his path kept leading him to Deaf communities, where he could discover and share. It was eye-opening what troubles the deaf in different cultures have in common and which they don’t.

“If you can hear you don’t realize how important it is. For example, on public transport in the US, they don’t show you the name of the stops before you get there. They only announce it. That’s not the case everywhere. In cities like Delhi, Kuala Lumpur, and Bangkok, they show a lot of information visually. I think it’s because they use many languages in those countries.”

“America has the attitude that everybody should be able to speak and understand spoken English.” That’s a disadvantage not only to those that that don’t speak English but to those who can’t hear as well.

It doesn’t end there. “Did you know that all deaf people need to be bilingual? They need to be fluent in English as well as a sign language, like ASL. That’s a completely separate language, with its own grammar, by the way. Most people don’t realize that. And even then, Deaf people still can’t fully integrate.”

Of course, he’d been aware of all that before he headed out. But seeing how these things were dealt with elsewhere made him realize what was possible. It made him realize the role he could play. “I recognized I was done working on myself. Now it was time to help other people. It was time to change things.”

So he came back home.

Or, as he says on his website (some of which I helped write), “An able-bodied person will only ever be able to understand having a disability on an intellectual level. They can’t grasp how it feels. And so, for them, fighting for people with disabilities would be a cause; never the cause.” Only a disabled person could truly understand.

What was more, only they could ever be dedicated enough to get that message across to the able-bodied. And as he’d broken down plenty of other barriers why not this one as well? So he realized he had to do his part for democracy and run for Congress.

Not that it would be easy.

“Do you know what ‘ableism’ is?” Chris asks me. I admit I have no idea. “It’s where people discriminate in favor of able-bodied people.” Not having wheelchair access is a form of ableism. So are those voice-only announcements on public transport. “It happens in politics as well.”

He’s right. According to Wikipedia there are currently five congresspersons with disabilities. As there are 535 seats in Congress – 100 senators and 435 representatives – that means less than 1% have disabilities. In the meantime, the CDC reported that in 2015 there were 53 million US adults with disabilities. That means they make up 16.4% of the population. In other words, even if Wikipedia is off by a factor of ten, disabled people would still be underrepresented.

Chris Haulmark has experienced it himself as well. Three others announced they’re running for the Democratic nomination in his district. They are Andrea Ramsey, Joe McConnell and Tom Niermann. His announcement video received more than a quarter-million views (53k on Facebook site and 236k on Ai-media). That’s more attention than the rest received combined and then some. And yet, while the others received full-length articles in the Kansas Star (here, here and here), Chris received only a paragraph. To add insult to injury, it was in in one of the other candidate’s articles.

And what is within the first ten words of that paragraph? Yup, you guessed it! The word ‘deaf’. In nearly every way the paragraph is a direct copy of an email that Chris sent them. Except, of course, he didn’t mention being deaf. They found that information somewhere else and then felt it pertinent to mention in the first sentence.

Is this because his deafness would make it impossible for him to work in Congress? No, of course not. Sure, he’d need an interpreter, but is that ever mentioned as a big deal when foreign dignitaries visit? It certainly doesn’t seem like enough of a reason to mention it in the first ten words. Nor does it justify treating his candidacy as an afterthought in somebody else’s announcement.

They might as well just have written ‘that deaf guy’ and left it at that.

So what did Chris think of this? “It wrangles a bit, but I’m not going to let it slow me down. This shows how important what I’m doing is. A lot of ableism isn’t conscious. It’s not like they’re sitting there slapping each other on the back as they’re doing it. So, making people aware they’re doing it will already undermine some of it. And my candidacy can raise awareness. I mean, you learned about ableism and now so have your readers.”

So does he think he actually has a shot?

“Of course I do! 2018 is going to be a crazy year. Anything can happen. And that includes the first deaf congressperson in US history. Besides, I’ve been getting a huge amount of support and encouragement. Movers and shakers are telling me I can build bridges between communities. Not only the bridge between deaf and hearing, either, but the bridge that our divided and partisan country so badly needs. And if I have a shot at doing that, then it is my duty as an American to run.”

And so, Chris Haulmark’s path has found him. To walk it, he now knows he has to build bridges. The best part? Once built, those bridges will be crossed by thousands – perhaps millions – of people walking their own paths. Something that otherwise might be impossible.

Want to help him build? Then spread his message by sharing his site (where you can also find out more) or this article. Even better, if you’re a US citizen you can donate to his campaign. Any amount is welcome.