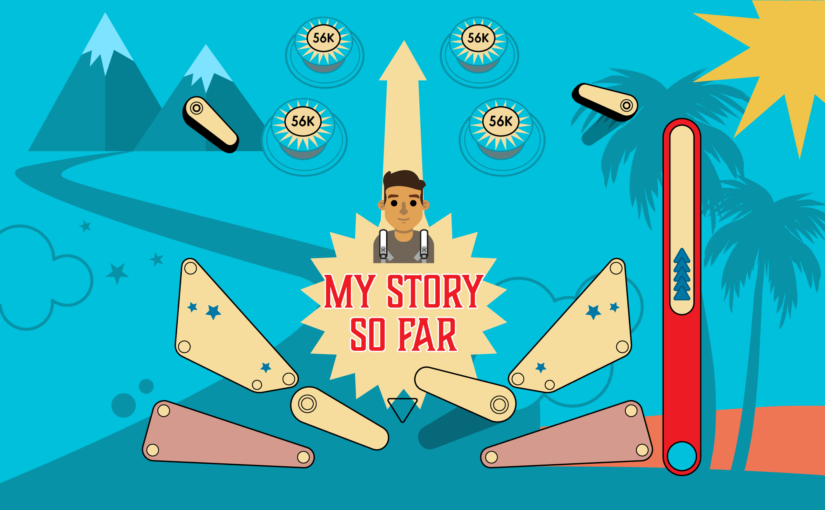 Our second fantastic guest poster is Etienne Koch. In his post, he paints us an explicit picture of his journey as a digital nomad so far. He’ll die happy once he’s saved the world from global warming, toured Europe with his guitar, and held a handstand for ten seconds. He likes to wear non-matching high-socks, oh, and is single.

Smoking hot Latina women fan me with palm fronds as perspiration drips off their bare breasts in slow motion. I glance up from my laptop at the crashing waves for a moment’s inspiration. Sensing the opportunity, one of the ladies cheekily slips a hand under my floral shirt. I politely remove it—“un momento por favor”—I’m only halfway through my work day. In five minutes I’ll be done and then I’m free to do—whatever.

A loud crash tears my dreams apart. Jeff, the drunk Canadian guy that was sleeping on the top bunk has smacked head-first onto the hard hostel floor. Contorted and face-down, he looks very—dead. (Oh my god!) I jump out of bed and try to shake him alive. He answers with a gentle snore. How the hell did he sleep through that?

Unsurprisingly, I’m fully awake now. It’s two AM, there’s no ocean in sight and the only breasts around are Jeff’s. How, I wonder, did I end up here, in a sticky bed, being molested by Nicaraguan mosquitoes, nine months into my journey? Well, I followed my heart, tried to make sensible decisions, and got deflected by the arms of life’s pinball machine.

Let me use this wakeful interlude to reflect on my story so far. All aboard the magic memory ship! 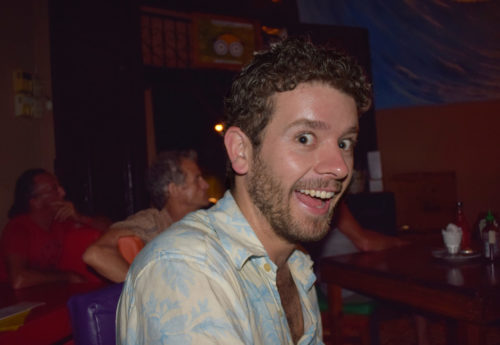 Inconvenience is falling in love at the beginning of your travels and finding out her feet are glued to the spot.

Inconvenience is running out of money and food during a grueling bicycle trip and finding nothing but soggy pizza crusts in the dumpster.

Inconvenience is meeting amazing people at a time when sickening deadlines hurtle towards you—especially when said people invite you to join in on the skinny-dipping in bioluminescent water and drinking wine by the fire.

For us nomadic types, the biggest inconvenience is a lack of freedom. But the freedom itself breeds recklessness which in turn finds you in highly inconvenient situations. You find yourself too far-removed from the traditional office. More than once, I felt like Noah on the Ark. Sure, lots of animals, but no wifi connection.

You find yourself in pretty weird situations. Like, when I pulled work-all-nighters on Canadian street corners (don’t ask). It was cold, but hey, the streetlights were beautifully ambient. There was the risk of being robbed, but then fear can be inspiring. My client in Switzerland had no idea.

Freedom even allows you to work on an island on Lake Nicaragua. Now islands are actually not as inconvenient as they sound. Except, of course, when the power goes down for days, you have deadlines, and you’re trapped because heavy winds mean the ferry can’t run. It took almost three days before I was saved—as the legend goes, by three men on a rowing boat. Apparently, they had to inspect the cable by hand, meter-by-meter, until they found the fault.

Like Jeff, I never expected to fall as hard as I did. But I did. I fell for a girl I met at the Taco Bell drive-through.

You know how we met? Because walking through a drive through is illegal in America. So she let me get into her car. Me homeless; her gorgeous. Why would a hot girl even think of allowing a potential psychopath into her vehicle? It might have been my foreign accent or the vibrant life-energy in my eyes. Or maybe she was just drunk. Best night of my life!

Fast-forward about four months, and I’m listening to Bon Iver’s version of “I Can’t Make You Love Me” while sobbing convulsively in a cafe in Léon, Nicaragua, as people look over me at the specials board. Doesn’t anybody care? Amazing how people can ignore the unpleasant.

We’d broken up 3 weeks ago.

Don’t worry, I’m okay, back on the road now, with a slightly tender heart. Sometimes it’s not the nomad that’s scared of commitment. She argued that four months is not enough time to make a marriage decision. I disagree. I know you guys probably think I’m ridiculous, but as my brother said once: “I’m not walking away—so if you’re not walking away, we’re here to stay”.

Sigh. Love and nomadism make a bitter-sweet cocktail. Good news is, the more you drink, the sweeter it tastes. That said, let’s brighten up the mood by touching on some of the sweeter moments.

The Joys (Hold onto your Nipples Folks) 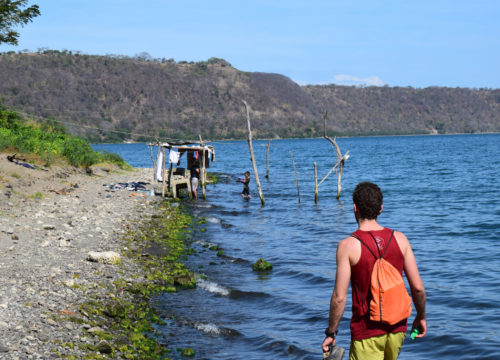 Joy comes in many forms, so let me tantalize you with my Thesaurus skills.
(for those not in the know, a Thesaurus is a dinosaur with a particularly impressive vocabulary).

Elation is two musicians from Quebec, so high, and playing songs on stage with more enthusiasm than Barney the Dinosaur.

Ecstasy is having your first toasted bagel with cream cheese and then eating the whole bag, including her share.

Solace is the first ray of morning sunshine after a night on a park bench.
Enchantment is finding a bush of delectable blackberries and then storing some in your socks for later.

Whenever I hit a low point—like doubting whether it’s all worth it (maybe I’m just running from something?)—something happens. Nomadic enlightenment! I find the time to hike a volcano. Or I taste the sweetest pineapple imaginable. I notice something that’s already there—and then I remember what I do it all for.

What’s that? The Thesaurus is not finished?

Serenity is sunrise on the top of an active volcano, after camping the night.

Jubilation is when a client loves your work when you thought they’d pull out all their arm hair instead.

Wonder is when you’re on a ferry and you’re transported by the magic of water itself.

Admittedly I haven’t mentioned super exciting forms of joy, like skydiving, or swimming with sharks. But hey, for me, joy is a perception. Objectively perhaps my life is not all that exciting. But I think travel has helped me notice the magic in the mundane more often. Maybe one day, I’ll look at the wall, and Jeff will finally wake up to the sound of my nipples hitting the floor.

And if I never realize enlightenment, then I guess I’ll just give mediocrity and boredom a chance.

I think the moral of this story is that there’s no right way to be a digital nomad. Because as much as the term has become a trendy catch-phrase, or even an elite society, in the end, it’s just about freedom; the freedom to design our own lifestyles. When I set out on my journey, I had these ideas about how it should be. Then I discovered that didn’t make me happy. Now, I try to be like water.

For, as Lao Tzu says, “Water is fluid, soft, and yielding. But water will wear away rock, which is rigid and cannot yield”

Being flexible, (and having low expectations) improves your chances of being happy with your reality.

So if your dream is to work from a log cabin in Siberia instead of a beach house in the tropics (sweaty boobs aren’t for everyone), then good for you! And if you set out for the beach and find yourself unexpectedly in a log-cabin, see if you can embrace it while you’re there.

In the end, we’ll be alright. Things might not be stupendous, or titillating, but every day is another day. And who knows, your equivalent of Taco Bell girl might appear with a magical POP! just when you’re feeling un-glamorously okay.

And if not, there’s always Jeff.

5 thoughts on “The Digital Nomad Life — A Tale of Inconvenience, Hot Love, and Great Joy.”