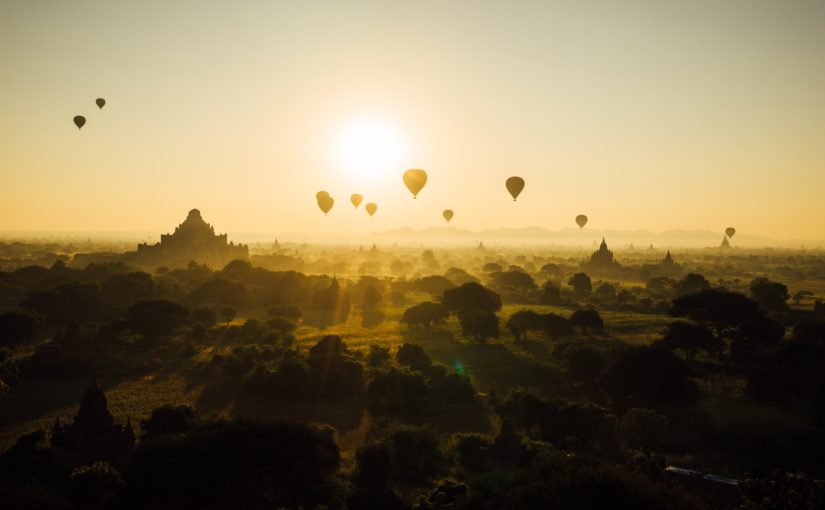 Of course, you want to fly for less! Who doesn’t? Flying is already expensive as it is – we’d rather not spend more than we have to. I mean, we’re not here to pad the airlines pockets, are we? Hell no! We’d rather spend that money on seeing places, living the life and having adventures. And yet we can’t always slow travel, so sometimes we need to fly for less. How can we do that?

Two pieces of good news. You can and it isn’t that hard. Today I’m going to share with you what I’ve learned talking to other nomads as well as what I’ve picked up myself after my many years on the road (slow traveling or otherwise). There are a lot of ways to circumvent the system so that you’re left with more for the other things in life that matter.

Sweet, right? I’m okay with you doing a little celebratory dance if you want to. But only if you really want to. No half-arsed dances, please. You’ve either got to commit or not bother.

But then, if you think about it, that’s true of almost every aspect of life.

Okay! And we’re backing away from the armchair philosophy (slowly so as not to startle it – you never know what they might do when startled) and returning to the topic at hand: How to fly for less!

I’ll make you a deal

Before we come to my suggestions, let me just say one thing: I’m sure there are other strategies out there that I’ve not yet included. If you do happen to know some, please let me know! Then I’ll include them.

In return, I’ll gladly give you a hat tip. In that way, you get kudos, while the rest of us get to see a little bit more of the world and cross off a few more things off our bucket list within the budget we have. Who could argue against that?

Try and get lucky

Put on the song, do another little dance (both optional) and head over to The Flight Deal (that one isn’t). This is a website that is devoted to good deals and airline mistakes. Yes, they do make mistakes. Though in our imaginings corporations are soul-destroying robots, they are in fact still human.

This translates into some corporate drone, who perhaps has had a big weekend, not paying attention and putting a decimal point in the wrong place. Sure, they’ll figure out their mistake soon enough, but if you’re fast you can capitalize on that and not just fly for less but fly for near to nothing.

And that means more money for Pina Coladas!

So if you’ve got time before your flight, be sure to check out this site regularly, as these mistakes sometimes only last a few hours. And when something does pop up, grab it with both hands. Don’t hesitate. You’ve got to plunge in, or learn to enjoy the bitter aftertaste of regret. It kind of tastes similar to when you throw up into your mouth after a bit meal.

That didn’t work? You didn’t get lucky? Well, then the next question you’ve got to ask yourself is:

Do you need luggage?

If you’re good at packing effectively and can manage with carry-on luggage, then check out Skiplagged. This is a site where you buy multiple tickets because they’re cheaper than a single one.

How can that possibly work, right?

Well, most airlines operate based on a hubs and spokes system, where they have a lot of flights between hubs to get you to certain parts of the world and then put you on a ‘spokes’ flight to get you to the destination you actually want to get to.

The thing is, often the spokes destinations aren’t as popular as the hubs. So, in order to fill the seats, the airlines end up selling them cheaper than a ticket to a hub only. The upside is that you can book a two leg journey for less and then simply get off after the first jaunt, at the hub, which is where you wanted to go all along.

Now, as your luggage is going all the way to the last destination, you obviously can’t take that. Another important point is that you shouldn’t buy a round ticket as you not getting on the second flight automatically means that the rest of your ticket is cancelled! So be sure to book that separately.

Find out what is what

Need your stuff? Yeah, so do I. It’s hard enough to live on the road with only two bags – I don’t think I could manage with only one. So on to the next strategy. For this one, I prefer to use Sky Scanner. This is because it has several features that I haven’t found anywhere else.

These are: ‘Flexible’ and ‘whole month’. 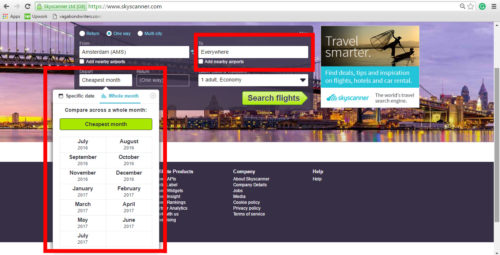 How do you use them? Well, it’s quite easy. You type in your departure airport, type ‘everywhere’ in the destination box and, rather than choosing the day you want to fly, you opt for the whole month you want to travel in.

Up pops a list of what are the cheapest flights on the cheapest dates. Then you just click where you want to go. That will give you a day by day breakdown of how much you’ll pay when. From there it’s easy to figure out when to fly for less! Often, just flying to a nearby airport that’s more popular can save you hundreds of dollars. Then you can take a bus, or – if you’re okay with seeing the sights – book an onward flight a few days later, when it’s cheaper.

“But that’s not what I want”, you cry. “I have to get to Cambodia, not find tickets the other way!” Fear not, that’s the next step. You see, if the flight is cheap in one direction, it’s almost always also cheap in the other direction. So then, with your list of cheap destinations from Cambodia, simply reverse the direction of your search.

So if you find out it’s cheap to fly from Cambodia to Amsterdam, put Amsterdam in your location and choose Cambodia as your destination. You might have to jiggle the date a bit (I’ll always ask for the whole month and then focus on the period when I want to fly), but you’re bound to find flights in the vicinity of the price you found going the other way.

I haven’t used the Airfordable site yet, but the premise sounds promising. The idea is that you get them to buy a ticket for you and then you pay them over the next couple of months. Then, when you hand over the last dollars, the ticket is yours!

This means you can buy tickets even if for some reason you can’t use your credit card, or don’t want to put your flights on there; perhaps because you don’t want to pay the fees, or because you want to be able to charge something else to them.

A great idea – particularly for those of us living on a shoestring. And let’s be honest about it, most of us eventually end up scraping the bottom of the barrel when we’re living on the road.

The final point if you want to fly for less is not to wait until the final days before you book a flight. A month ahead flights are going to be a lot cheaper than they are a few days ahead. Yes, it sounds less adventurous that way, but tickets really do go up the closer you get to the day of the flight. And so booking earlier means you’ll have more money to go on an adventure when you arrive.

I know which one I choose.

So start searching early and look around on a couple of sites. Also, as a final note, make sure you actually check the website of the airline. Sometimes the cheap tickets will be gone and sometimes you might get lucky and they’ll have cheap flights on offer that the aggregate sites don’t know about yet. And that’s always nice little bonus!