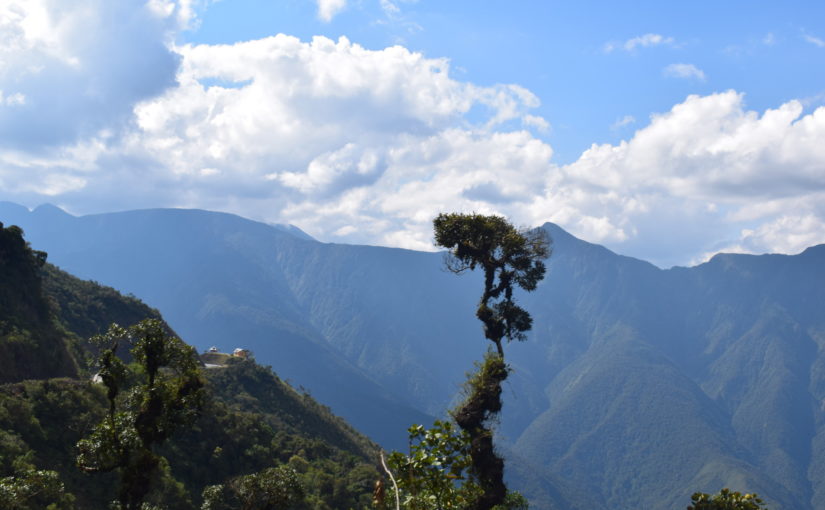 Like I’ve said before, on the road a place is a lot like a lover. You don’t want too many people to have gone there before you.

That sure is true of Coroico. Though it’s only a few hours from the capital, it might as well be in another world. The altitude is a little less than half that of La Paz (at 1740 meters). And though it’s still mountainous, it is low enough for the amazon to have claimed every valley and peak.

From every crack, every incline, and every cliff face vegetation hangs, creeps, and reaches for the sky. From wherever you are, you’ve got spectacular views of valleys and peaks. Every view is like a painting – only better as this is the real deal. 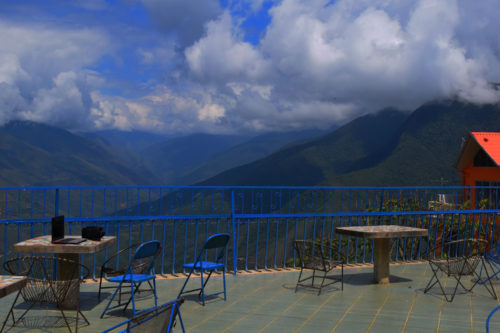 In fact, of the places we’ve seen in Bolivia, I think I can say it is the most beautiful. That means it beats out a lot of competition – like the vicinity of Sucre, Lake Titicaca and Isla del Sol. (No, La Paz does not make that list).

A Source of Inspiration

The place sure is beautiful. Take the clouds, for example. I’ve never seen them move like that before. Sometimes they’d hang overhead. Sometimes they were nowhere to be seen and you had a blue sky. Sometimes they’d lie in the valley like some kind of insubstantial lake that just begged for you to leap out from the nearest cliff. And sometimes they’d creep up the mountains, between the trees, and right through your front door.

Another phenomenal attraction was the birds. There are tons of animals, of course. It’s a jungle, after all. But the birds and their magnificent colors were always there. They would constantly twitter, swoop and try to steal your breakfast while you were getting the salt.

I could go on, but I think I’ll let the pictures speak for themselves. Suffice it to say, if you’re looking for solitude and inspiration, then you could do worse. It’s also phenomenal for walks. Close to every hostel and cabin has a stunning view. And there’s an animal refuge with bears, lizards, tortoises and – best of all – the people in cages while the monkeys roam free.

There is also, of course, the world-famous death road that ends not half an hour out of town. I don’t know why the people don’t make that extra bit of the journey to get to Coroico from there. But the majority of return to the more expensive and far uglier La Paz the moment they’ve finished their death-defying trip.

Too bad for them. At least that means there is a place for writers to write, aye?

Admittedly, Coroico itself isn’t all that much. It is tiny. It has a central plaza, a public pool, a football pitch, some hostels, and a marketplace. In truth, there aren’t enough bars to get drunk on a pub crawl. Yes, that means you’ll have to drink it all in one place! The restaurants are equally limited.

Of course, it isn’t a complete desert (Because it’s a jungle! Pedum pum pish!). There is one oasis to be found in town: Carla’s Pub. A wonderful Dutch lady who – and this is a surprise – is called Carla and owns the place. It is because of her that the bar deserves special mention. That is not to say that the pub itself isn’t great. It is. The food, drink, and atmosphere are fantastic.

It is just that it is Carla that raises from another great bar on the road to a new level.

Friends in La Paz told us to seek her out, as she would be able to help with whatever we might need. They weren’t kidding. When we told her that we would like to stay a little longer in Coroico and if she might know somewhere she immediately set about finding us a place. She called up everybody and got us half a dozen places with better prices for longer stays.

We ended up staying at Las Cabañas Del Profe, which I can also heartily advise. It is reasonably priced and we had our own cabana. We had our own kitchen, king sized bed, patio (with hammock), and – of course – a phenomenal view. What’s more, the host was a great guy who we enjoyed more than one evening of wine, stories, and music with.

Another way that Carla helped us out was with the internet. That is something that you will have to take care of if you’re going down there and need to be connected. For the internet in Coroico is the worst I’ve seen since the century turned.

Basically, the internet dies the moment it starts to rain and as this is the jungle, it will rain most days. That means there are a lot of interruptions.

Even when it is working, it isn’t great.

In fact, the closest it ever came to ‘working’ was how people ‘work’ in a Spanish village around midday. As in, everybody’s having a siesta. And the only way you’re going to get a meal is if you go chase that chicken you saw wandering around aimlessly and ownerless earlier.

The solution? Buy a dongle. This was an absolute life saver. Sure, it wasn’t exactly cheap. But as not working is far more expensive it worked out in our favor. And hey, we still have the dongle. Hopefully, we can use in other countries and have an extra bit of backup as we continue our journey.

Another thing that has to be mentioned is the bugs. People seem to forget how many of these little bastards there are at the edge of the jungle. Maybe that’s because they never include them in the movies. This is not the movies, though and there sure are a lot of them.

To make things worse, quite a few varieties are out for blood. The worst one had to be this little yellow fellow. You won’t feel it feed on your bodily fluids. But when it finishes and has left behind a welt and a spot of blood, you sure will! These bites can last for days.

Eventually, though the climate is fantastic (not too hot, not too cold), we decided to wear proper trousers and long sleeves. Oh yes, and socks. My girlfriend forgot socks one day while helping out in a garden and her foot looked like it belonged in a horror movie.

For who is it? 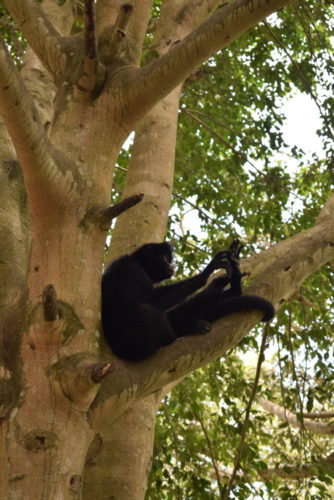 I don’t think Coroico will work for every freelancer. The more reliant you are on an outside connection, the harder it will be. So I’d have to say, you’d want to be able to work text-based only.

On the other hand, if you don’t need the internet at all – say, if you’re writing a book or a screenplay – then it is perfect. For there are few distractions and lots of inspiration.

One of the things we missed was a car. The mountains are beautiful, but they’re steep and sometimes you just don’t feel like walking uphill anymore. Sure, you’d love to take a taxi, but away from the principle roads, those can be hard to find and when you do find them, they might take that opportunity to financially rape you.

What’s more, a car solves one of the other big problems and that is how to get back to La Paz every so often. Why do you need to go back? Well, unless you’re willing to live off chicken alone or try every item on Carla’s menu (twice), you will have to get back to the capital. The village, though it has quite a variety of products for such a little place, doesn’t have everything.

For example, we could never find any plain yogurt. Flavored yogurt wasn’t a problem. Ask for plain yogurt, however, and they’d look at you as if you’d grown a second head.

Finally, you’ve got to be able to entertain yourself. If you’re somebody who has to regularly hit the bars or needs to dance, then you’re just plain out of luck. Carla’s does have some activity on the weekends and you can get drunk with the locals on the plaza, but that’s about it. So you’ve got to be able to sit back, shoot the shit and enjoy a glass of wine with the view.

On the plus side, what you don’t need to be is rich.

You can eat for near to nothing in the market (I think it was two dollars for the more expensive meals?) get juices for a pittance and if you’re willing to book for a month, there are hostels that will cut their price in half (to about 10 US a day) during low season. Now – if you’re a writer just getting started – that has to count for something!