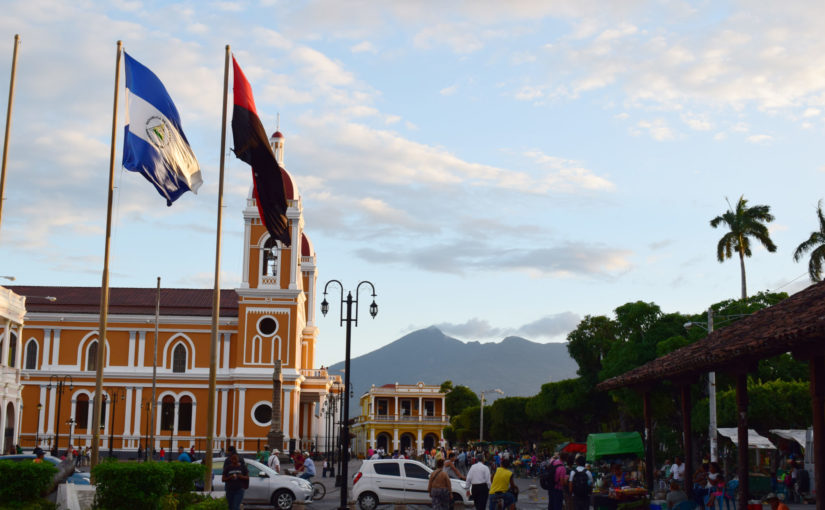 The first place where all the pieces were in place was here in Granada, Nicaragua. If you’re thinking about settling down anywhere in Nicaragua to work for a while, then go here. On the boards, people will try to get you to go to San Juan del Sur. I wouldn’t listen to them.

When I was there (though it was a year ago) there were too many power outages. Besides, the internet was too iffy to make it a good work location. It also got boring, as it’s not much more than an overgrown village. Sure, the party scene is great, but is that what you’re looking for in a digital nomad location?

Instead, choose Granada. Here’s why:

Granada is an old colonial town with tons of pretty streets and colonial buildings. Everywhere the walls have been painted with lively colors that create a vibrant atmosphere. They even have horse-drawn carriages!

The houses are even prettier on the inside. The city center is full of colonial houses, built around central gardens. Those that have been well maintained – that’s not everywhere as the locals often prefer concrete to plants – let you live right at the garden’s edge. For example, in the house we’re currently living the only rooms are the bedrooms. Everything else, including the living room and the kitchen, open onto a central plaza.

The streets are calm and not as traffic-choked as many other cities around the country or the region. Instead only at rush hour is there ever any significant traffic. That might be because the local government has kept the main thoroughfare to the north of the town. Other city planners across South America could learn something from that!

The facilities are good too. The internet hasn’t gone down once while I was here and the power has been stable despite this being a developing country.

What you can do in your time off

Granada is close to a lot of things. It’s on the edge of a lake (which is great for walks, but you shouldn’t swim there). Forty-five minutes away is another lake in a crater called Apoyo (that one is clean and swimmable). The town is close to another volcano – called Mombacho – which has a national park at the top that you can visit. It’s well worth it.

If you want to venture a little further afield then the capital is only an hour away. San Juan Del Sur, the party town I talked about earlier, is 2 ½ hours by bus. So you can still go crazy for the weekend there if you like. You can even take a weekend trip to Ometepe with is a two-volcano island in the middle of a huge lake.

The town has a lively central road called the Calzada which has dozens of restaurants and bars. You can eat everything from Indian food to pizza here. Most will put you back less than 10 dollars. (One of the biggest advantages of Nicaragua has to be how ridiculously cheap it is. On a budget you can eat for 3 dollars or less, while beers won’t put you back much more than a dollar).

The city has dozens of cafés and bars. Admittedly, not all are great to work in. Quite a few cater to the drinking crowd instead. Still, there is more than enough choices. We’ve found a few good places to work from. Many places have both decent internet and sockets so you can plug in.

Even better, for a Latin American city, the coffee is actually pretty good.

That’s only the tip of the iceberg. If I spent any more time here the list above might well change. Also note that if you’ve got a kitchen you can cook, as the supermarkets are well stocked (And there is a market). It will cost you 30 cents per person to take a taxi to the local supermarkets (there are four of them). The one called Colonial has western products.

Like always, you can go to AirBnB to look around. Another digital nomad we met here said he found a great place on there. (He gave me the link they have a bunch of apartments so check there if this one is booked).

We didn’t choose that route. We first grabbed a room in a hostel. There are quite a number on the west side of town, away from the main tourist stretch. Then we walked around and asked.

The hostel we chose was called Backyard. That turned out to have been a mistake. It’s a great hostel, has a pool and is very affordable. Unfortunately, it’s also the party locale, with its own bar. They say they’ll close at 12 but the bartenders don’t seem to pay too much attention to that. One night it didn’t close till 4 AM. That doesn’t work when you want to start working early the next morning.

Eventually, we found a room in a beautiful colonial house for 300 US a month. It turns out the owner did have an advert online, just not at AirBnB. Instead, it was at encuentra24. That’s the local Nica variant of the site. Like I’ve said before, those are often a lot cheaper than using AirBnB. I think it’s because the site is used by actual people from Nicaragua. Check out his ad here if you want to check availability (our picture is better!).

The best two ways to get there are through either Managua – which is the capital of Nicaragua – or through Costa Rica. If you’re tight for money, then go via Costa Rica. Flights to there are generally far cheaper than to Managua. Then you can take a bus northwards.

Tica Bus will take you close to here for 27 US, while there are rumors that Nica Bus goes straight here. No, it doesn’t say so on the site. But then, many Latin American countries haven’t yet fully bought into the internet revolution.

Note that you can go local. If you do that, you’ll often pay less than 5 US for the whole ride. If you speak decent Spanish, it’s completely possible to do this in relative comfort. Whatever you do, don’t take what are known as the chicken busses!

They might look quant, as they’re old yellow American school buses, but they’re not very comfortable. Sure, they’re fine for one or two hours but more than that can drag. The owners have no problem filling them till they burst. What’s more, there is no real space for your luggage, so you might have to keep that in your lap. What’s more, as it gets very hot in the middle of the day in Nicaragua, that quaintness can turn into a particular kind of torture.

Things to note and how to get more information

Try to avoid Nicaragua between March and May. These are the hottest months and temperatures will climb up to about 40 degrees Celsius. You’d be much better off visiting after May. May till November are the rainy season and that’s really the best time as it actually gets fresh. By the way, rain here means a heavy shower and then it will clear up again.

Another advantage of visiting during that time is that it’s not high season (which is from December to April). Though admittedly, that won’t affect you that much as a digital tourist, as most tourists aren’t looking for apartments.

Need more information? Then the first thing that you should do is join the Expats of Granada Facebook group. There are enough active people on there that can answer your questions for you. They’ve also put together a list of services and phone numbers where you can get any sort of information.

So that’s it! Granada really is great for a month or two of work. It’s cheap and cheerful. There are lots of tourists and even digital nomads. What’s more, the locals are well educated in general, which means you can have a good conversation with them. The only real drawback we’ve had is that because of the gardens there is a bit of a mosquito problem. And it isn’t that bad. We’ve had worse.

Most people can get a three-month visa which is extendable. Or, You can go for a short foray across the border and they’ll give you another three months. We’ve heard people that have done this for years (though the government is getting tougher on that now).

No, Granada is a great choice if you want to get a little off the beaten track. Not quite your style or want a beach? Then why not freelance abroad from Santa Marta, Colombia?