One of the big dangers when you’re out and about in foreign countries, with all your belongings packed into two bags, is that somebody decides to take what is yours. That can put a real crick in your holidays and your travels.

This is particularly true if, like me, you live on the road and freelance from the world’s corners. As then your livelihood, as your work depends on having your gear. Losing it means a double whammy of replacing it and not being able to work while you do so. And that’s a hard thing to survive, no matter how many of the characteristics of a successful traveling freelancer you have!

For that reason, over the years I’ve learned a number of strategies how not to get robbed. I thought I’d share a few with you.

Now obviously, you want to be paying attention to your surroundings. You want to be watching what people are doing and who is watching you. The problem is, you’ve only got one set of eyes and hopefully little experience in having your stuff stolen, even while the people who are targeting you do this for a living and rarely work alone.

What’s more, you’ve got to be alert all the time, while for them it only takes one distracted moment and the deed is done. For that reason, the best way to prevent getting your stuff stolen isn’t noticing them.

It is not getting noticed by them.

Because if they don’t think of you as a target, then they’ll never try to make off with your stuff. So how do you not get noticed?

When on the road wear ‘road clothes’

Yes, I know that silk shirt with the leopard print is really comfortable and that those designer jeans with the massive logo fit you like a glove, but perhaps keep those for when you’re not on the road.

Out there those are only likely to get you noticed.

Instead, when you’re actually moving between places, wear a set of road clothes. These are tough, rugged, not all that shapely (as any attention while moving around is generally bad attention) and a little bit worn. They’re also simple and unassuming. All this is because they’re meant to say two things.

In effect, I’m talking about road camouflage, which both makes it look like you are slim pickings and more trouble than you’re worth. In that way, the thieves’ eyes will slide right off you and they’ll go for somebody else.

Get bags that are a bit banged up 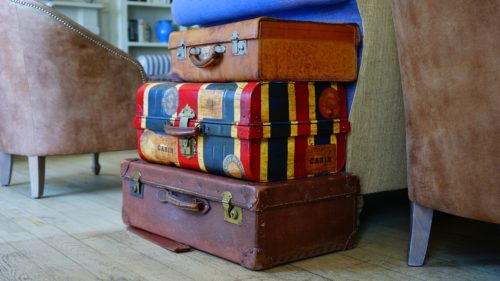 For the same reason, don’t get the newest suitcases, or at least make sure that they don’t look that way. Perhaps buy a bunch of stickers of countries you’ve ‘visited’ (you don’t actually need to have been there).

Perhaps think about buying your luggage second-hand. There are tons of people that do away with perfectly good suitcases because they look a little worn. And that is exactly the type of suitcase that you want if you travel a lot! As an extra bonus, you’ll have to spend less money on them.

If you don’t want to buy them second hand, then consider banging them up a bit. Sure, I understand that if they cost you a few hundred dollars then you don’t really want to drag them behind your car – but then you probably shouldn’t be buying suitcases that expensive anyway.

On the road status-symbols are bulls-eyes

That watch, the gold chain, the newest smartphone, and the high-tech camera might make you look the bomb among your friends, but on the road, they do something quite different. What’s that? They paint a series of red and white concentric circles on your forehead.

Not that sure about your hotel? Then keep them tucked away the entire time!

A lot of hotel staff in the cheaper hotels don’t get paid that much. They might, therefore, help themselves to your things or alternatively let the criminals know who to target.

Tourists look around in wonder

You can always spot a tourist. They’re the ones that look up at the buildings, who seem amazed that there is a McDonalds here, stop each other to point out the homeless guy and take pictures of utterly ordinary things like drainpipes.

The locals don’t do all that. They see this stuff every day.

That doesn’t mean you shouldn’t look around. What it does mean is that you should try to be circumspect about it – particularly if you’re carrying around your gear, or there are a lot of people lounging around looking at you.

Sure, they might just be enjoying the view of your shapely and well-trained body making its way across the boulevard. It is also possible, however, that they’re scoping you out for different reasons. They might not just be stealing glances but also be deciding how to steal your things.

They watch how you walk 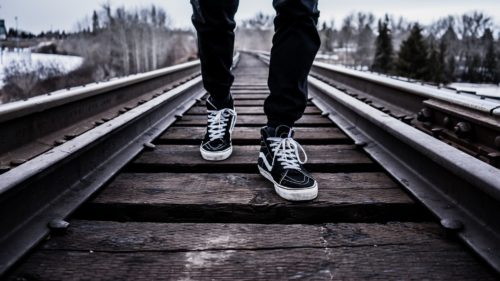 People more vulnerable to mugging and getting robbed walk differently from those that don’t. Thieves can pick up on this and use it to pick their targets.

So how do more vulnerable people walk?

More unevenly, apparently. There are a whole bunch of theories about why this might be the case. I won’t bore you with them here. Instead, all I’m going to suggest is that if you’ve had trouble with getting attention from criminals, look at some home videos and study your gait. Alternatively, have somebody film you when you walk – preferably when you’re not aware they’re doing it.

What you’re looking for is if your gait is uneven, your movements aren’t synchronous and you don’t walk fluidly. Then you can see about correcting your walk as much as possible. This will make you less likely to be targeted by thieves as well as mean you won’t have as many movement problems when you get older. And that has to be an extra bonus!

Have a safe bag

When moving between spaces, I always put all my gear in one backpack and I make certain it’s never out of my sight. Generally, it’s on my lap. If I’m somewhere longer, I’ll put it on the ground and put my leg through one of the loops. When I’m walking around I make sure that I’ve got it securely attached to both shoulders. I don’t put it overhead when I’m on a bus or on the plane but put it by my feet instead, even though that means less leg space.

I never allow anybody to take it from me, not the concierge, not the taxi driver and I certainly don’t let the bus driver put it in the hold. Stuff always disappears from there! (I’ve heard of stories where one of the crew actually spends the whole trip in the hold, searching bags for valuables – a crappy but no doubt lucrative job).

I even take my safe bag with me to the toilet.

Sure, all of that might sound extreme, not to mention inconvenient, but it does mean that if they do make off with something, it’s likely to be one of the bags that only has my clothes in it. In which case, I might have to buy some new jeans, but at least you’re not stranded without cash, gear, or anything else that’s truly vital for my livelihood.

Don’t put all your eggs in one basket

At the same time, don’t have all your credit cards, bank cards and hard cash in the same bag. Because in that case if they grab that one, you’re truly screwed.

I normally try to make certain that some of my cards are in my wallet, while others are in my bag. Similarly, my wallet will have one form of ID, while my bag will have the others. In this way, even if they do make off with something, they won’t grab everything.

Also, I put my wallet in my front pocket, as it’s far less likely to get lifted from there than if it’s in my back pocket.

It doesn’t end there, however. You also want to make certain that you’ve got several cards with several different banks, with your money divided up between them. In that way, if you lose a card, or they copy and they plunder your account, or your bank blocks a card, or it simply doesn’t work in the ATMs of the country you’re in, you’ll still have your backups.

The more unique your gear is, the harder it will be for them to sell it and the less likely they’ll, therefore, be to steal it. For that reason, choose unique colors, have it monographed and cover it in stickers.

All of that will make it less likely people will try to make off with it.

Personally, I cover logos with stickers, so that my high-end gear looks just like any other knock off variety. After all, I just need it to work, I don’t need other people to know how good it is.

Not getting robbed is never a certainty. There’s always a risk, particularly since you often end up traveling through countries that aren’t quite as safe as back home. That said, you can do a great deal to reduce how likely it is and how much they manage to grab when they do.

I’ve met plenty of long-term travelers who have never been robbed or have only lost a few inconsequential things when they did. And though no doubt there’s an element of luck in there, it is also a huge amount of being aware, being prepared, and not being the person that thieves are likely to notice.

Manage to do that and you can be just as safe on the road as you are in your hometown. And that means another hurdle to the traveling life has been removed!

So what’s the next one I’ve got to tackle to get you to go out there and see the world?