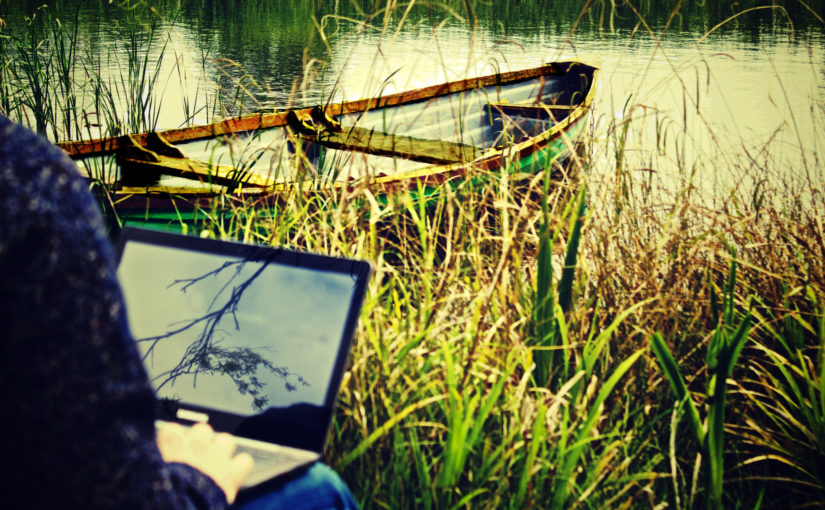 It is crazy how many people get that travel writing thing the wrong way around. They think that they should first launch a successful freelance writing career and then start traveling. Poppycock! (Isn’t that just a great word? Why did we ever let it slip away?). It is traveling that boosts your writing career.

Want to become a successful traveling freelance writer? Then start traveling today. Check if you’ve got the right characteristics for the travel writer life, start developing them if you don’t, scrape together some money, pack your bags, and hit the open road – though remember to take it slow.

That’s the way to do it.

Yeah, it used to be hard to travel and write, but no more – and that while the advantages haven’t gotten any smaller.

What am I talking about?

You can do almost everything via the internet nowadays

First of all, let’s tackle the biggest problem that most people think is associated with freelancing from abroad. They think they’re going to miss out on work and opportunities.

Sure, that might have been true in the time of Hemmingway, when everything went by snail mail and you always needed to leave a forwarding address. Those days are long gone, however.

Your mail follows you around provided you remember your password, you can access the internet from everywhere, and most clients have become perfectly alright with you working remotely.

They do actually want a face-to-face meeting before they’ll hire you? Well, then there is Skype, Facetime and a whole host of other programs to sort that out for you. Sure, it’s not exactly the same, but it’s not such a big difference that it’s going to cost you a job – and if it does then that person is probably a bit weird anyway. You might be better off not working for them.

Similarly, you can get paid via and do all your finances via such services like Paypal and internet banking respectively, buy (or sell) your books on Amazon and do all but the most finicky of research via the internet. Most courses are online as well now – something that’s certainly true of those about how to work online!

In other words, most of the barriers to working abroad have vanished in a stroke (okay, more like a series of paper cuts – but that doesn’t mean they’re any less gone).

Most places are cheaper than back home

One of the biggest problems when starting out is that you’re probably not making very much money. And so you want to make your dollar stretch. A great way to do that is by moving to a cheaper country. In many countries, you can live off less than 20 US a day, which includes rent (and evenings out)! That means your savings will go just that little bit further, while the breakeven point is that much closer.

The consequence? You’ll be spending less time working yourself into debt, or working day jobs and you’ll be in positive territory that much sooner.

There’s this interesting thing that psychology has found and that is that once our social circles are a certain size, we’re not all that keen to expand them further. We call this the Dunbar number, after the guy who discovered this phenomenon. It lies at about 150.

Beyond that point, though we might pay lip service to the idea of expanding our social group, in truth we’re not all that keen on it. And that makes intuitive sense, as each additional connect takes a lot of work as you’ve got to not only pay attention to them but also have some kind of idea how they’re doing with most of your other connections. One scientific theory even suggests that we’ve got such large brains just to maintain our many relationships.

The returns on investment, in the meantime, become smaller as each additional person doesn’t bring that much more to the table that hasn’t already been supplied and satisfied by earlier connections.

So if we live in a stable environment our social circles end up quite stable as well, with most of us not very motivated to expand it.

The way around that is simple. You have to leave. When you hit the road, you disrupt your social circle and though you might still maintain some of it (generally the bits you really want to), some people will disappear into the whirlwind of your trip, leaving you more ‘social space’ as it were for new people.

This isn’t just true of you but of everybody else you meet on the road as well, meaning that it isn’t just a one-sided thing where you’re crying out for friends and everybody turns back to their phones.

Instead, you’ll find yourself meeting lots of interesting new people – people who can give you new ideas, new insights, new opportunities and even new leads.

Now I don’t know about you, but for me, that was exactly what I needed to get my freelance career going.

You get knocked out of your mental rut

Travel changes all that.

It’s a sledgehammer to your mental constructs. It’s a knife through the cobwebs of your mind.

Suddenly you’re seeing, doing, talking and thinking about different things. Suddenly you’re exposed to new ideas and new perspectives. And this will affect your writing.

How can it not?

Even better, that direction will be different from all those writers who stay at home – in other words the vast majority – allowing you to gain insights that will forever escape them.

Because, like a fish doesn’t feel the current of the river it was born into until it leaves, so we don’t realize how our own society colors our perspectives and our beliefs until we see it from abroad.

You’ll discover yourself and what matters to you

One of the things with always being in the same place is that you don’t know where you end and where other people’s preconceptions of you begin. Therefore if you want to know yourself – truly understand who you are – then you’ll have to leave one of the two behind.

I don’t know how you can leave yourself behind. Drugs maybe? If you want to leave behind other people’s perceptions, however, then travel is probably one of the only ways to do so. It allows you to exit the bubble, the envelope, that you and the people you know have created and truly find yourself.

Armed with that self-knowledge you’re bound to become a better writer. After all, every single word you’ll ever write comes from within you. The better you know that space, the better those words will be.


Struggling with writer’s block? Can’t find a new topic? Hit the open road. It will give you plenty of new material.

You don’t even have to write about travel. I myself rarely do. The competition in the travel writer-sphere is just too fierce. No, for me the insights that travel gives me that are what I enjoy writing about most. And fortunately for me, they also seem to be what other people like reading about!

Heck, that’s why you’re here, reading this website, aren’t you?

You can always go back

The final point is that it is not final.

There is no reason it has to be all or nothing. I know plenty of writers who rent out their place half of the year and go traveling, only to come back home for the other half, live the sedentary life and write about what they’ve seen. That’s a fantastic way to live. You get to have the best of both worlds (and get to miss out on that part of the year you don’t like).

Besides, nothing is forever – not even the open road.

You should embrace that; not just because it’s a vital life lesson, but also for more practical reasons. Trying it out, seeing if traveling boosts your writing career, will allow you to figure out what does and doesn’t work for you. Then the next time – if there is one – armed with the knowledge accrued that first trip, you’ll go out into the world better prepared and better able to enjoy it. That has to be the point of it all, doesn’t it?

So don’t wait. Get out there! The world is huge and beautiful and you only get one lifetime to see it.