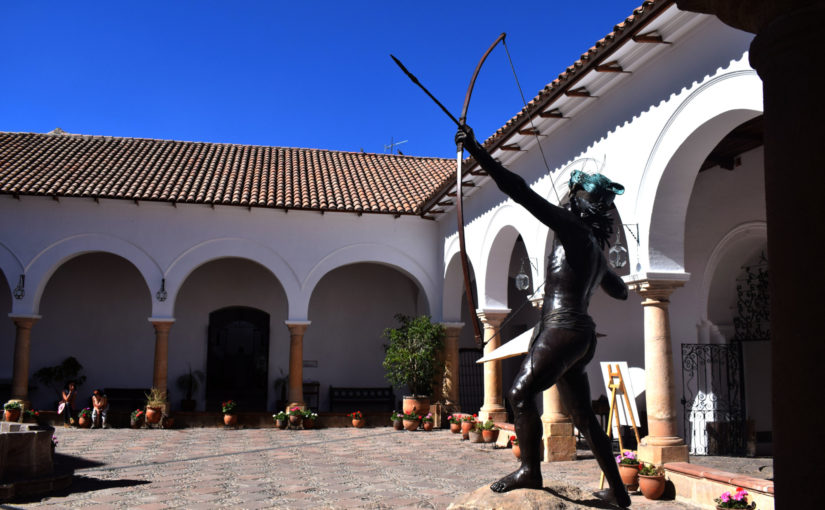 Of course, you can follow the suggestions of other travelers. Sometimes they’ll point you true. The thing is, they don’t freelance abroad. Instead, they are therefore focused on completely different things like hikes and adventure. And so, they often steer you wrong despite their best intentions.

For that reason, it would be helpful if somebody else who freelances abroad could point you in the right direction, don’t you think? Now where could you find somebody like that, I wonder.

We didn’t mean to stay in Sucre as long as we did. In the beginning, the plan was three days. We ended up staying for close to six weeks. Like I said in my article Slow Travel is Good Travel, you know you’ve found a great spot when that happens.

For those of you not in the know, though La Paz houses the economic and political capitals of Bolivia, Sucre is still the official capital. It’s where they signed their declaration of independence. The city was established by Spanish conquistador back when there was still silver in them hills.

The inhabitants have done a great job conserving the original city. And so the city center is still full of old colonial houses built around pretty little courtyards. In fact, they’re so pretty that it is a UNESCO world heritage site. The main square is a park. It is dotted with benches, lounging people and little old ladies selling you pigeon feed for a Boliviano (18 US cents) a bag.

It’s a blast to watch the children switch back and forth between feeding the pigeons and chasing them.

The city center is walkable and almost everywhere you’ll find something pretty. The result was that every day we’d go for walks with no real destination in mind – confident in the knowledge the city would provide us with some sight or other.

Our aimless meanders were aided by Sucre’s altitude. For at almost 3000 meters the city stays wonderfully cool throughout the day. In fact, when there aren’t old black-smoke-spewing micro busses passing (a definite downside of the city), the air is surprisingly clean for a city in a developing country.

Yet, that isn’t the main attraction. That has to be the people.

Somehow they don’t seem to have bought into the oh-so-popular machismo of other South American countries. They’re laid back and easy going, quick to smile and difficult to anger. This is, in fact, true of most Bolivians. I don’t think we’ve seen a single argument in our entire time in the country.

Even in traffic, they’re well behaved. For example, they don’t feel the need to lean on the horn when traffic isn’t moving. Nor do they cut each other off or push heedlessly into any space that presents itself.

This civility extends to the markets. There the people are always up for a little chat (provided you speak Spanish), nobody jostles you and the gringo tax isn’t too extreme.

In fact, while we’re on the topic of markets they’re surprisingly well supplied for a developing country. When you walk around the bigger market (That’s the one away from the center) you can find a wide array of fruit and vegetables, which puts other similar countries to shame. Don’t get me wrong. You won’t find everything that you’re used to back home, but the choice is still pretty varied.

Even better, almost all of what you find there is locally grown.

Don’t take that to mean that they’re boring, though. Quite the contrary. There are many festivals throughout the city and the year, where the people of Sucre show their more vibrant side.

The city is well supplied in many regards. There are plenty of cafes, shops carrying the more exotic items and restaurants galore that range from vegetarian to all-you-can-eat meat.

Of course, if you freelance abroad what matters is where you can sit down to work. And in that regard, there are also a wide range of choices. The town dotted with locations where you can hide away, enjoy the flow of foot-traffic (I wrote on the main square, Mayo 25 several times), or just stare out over the city (La Recoleta has a great view).

As for hotels and hostals you’ll also find a wide range of choices. We stayed in two hostals, the French consulate (they’ve got decent rooms) and finally found an apartment on Airbnb.

That last one was the clincher for us. We got lucky with a wonderful host (Both Laura and her parents were incredibly accommodating) and a fantastic apartment. (Note that if the one I linked to is taken, there are more possibilities with the same host). We originally booked it for a week and then ended up extending it for another one.

We were far from the only ones. In fact, I think our stay was on the short side compared to other people we talked to.

One of the main attractions of Sucre for those who want to freelance abroad is that it is cheap. If you eat local, you can get a three-course meal for three to four dollars US. When we shopped at the market we could pick up enough fruit and vegetables to last us for several days for less than twenty dollars. We ate at the main market once and got a full plate for a dollar and a half.

Want to take a micro-bus across town? That will put you back an astounding 50 US cents. Taxis are cheap too. We paid a little more than $5 US for a thirty-minute taxi ride to another town.

All that means it is a fantastic place if you’re a struggling freelancer trying to make your funds last while working your way up the pay ladder. If you’re willing to dorm it and eat local, I think you could probably live for 20 US a day – and that includes your bed.

Where can you still do that nowadays?

But it’s not all rainbows and sunshine. There are two downsides if you want to freelance abroad in Sucre.

Most of the day the internet is poor. That changes around midday and early evening. Then it’s an absolute disaster. For me, this was the one thing that often interrupted my calm. You don’t want to know how many times I screamed bloody murder as an image download failed or I couldn’t open my mail.

Sure, there are exceptions. For example, Joy Ride café’s internet works pretty decently at most times (though even they struggle midday). So we’d often sit down there and have a coffee every few hours as we took up their bandwidth. It isn’t the only place where that’s possible either.

Still, if you have to watch a lot of videos or you’ve got a freelancing job that needs serious bandwidth, then you’re just plain out of luck. The only way you might be able to pull that off is if you’re willing to work late at night. For that’s the only time when everybody and the toothless homeless guy aren’t using social media, finding Pokemon or doing whatever they do that squeezed the bandwidth down to a trickle.

Note that I have heard rumors that you can get a better internet connection installed. To get that, though, you’d need to actually rent a place for a couple of months. That kind of a connection will set you back about $40 US a month.

This is the second problem, as Bolivia isn’t all that connected yet. Sure, you can fly inside the country pretty easy. You can get there from La Paz for about $70 US and from Santa Cruz for about $42 US.

That’s not the problem.

It’s the getting to those places that can be a bit of a struggle. Your best bet seems to be to fly to Argentina or Brazil and then fly in from there. Check out my article about how to fly for less to get there cheaper.

Or you can also a take bus. This is certainly cheap. The downside is that it will take you quite a while on winding roads dotted with the occasional burnt-out wreck of bus journeys less fortunate. So make sure you’ve got both the physical and mental fortitude before you choose this route.

Tip: Take warm clothing when you do take these busses. They’re freezing and for some reason, you don’t get a blanket.

Sucre is a great place to go for those who want to freelance abroad but need it to be cheap. If you’ve got time and don’t need an internet connection that badly, then put it high up on your list of places to go.

The city has something magical.

It’s the same if you’re freelancing as a writer only, with small files and when research is largely text-based. If you freelance abroad as a web design, graphics designer, or if you do anything with videos, however, then you might want to give it a miss. At least, if you want to get work done.

As a final note, right now Sucre is still a gem. It hasn’t yet been overrun by tourists and touts. That will no doubt change in the years to come. So if you want to go, make sure you don’t wait too long.